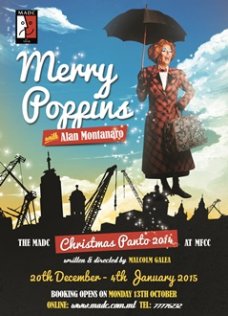 The MADC Panto is all set to Dazzle with Merry Poppins

The MADC is busy preparing for yet another of its famous Christmas pantomimes – with this year’s show promising to be nothing short of spectacular. Alan Montanaro returns as Merry Poppins, a dame with a difference and a magical twist, in this rollercoaster journey that doesn’t shy back from delivering the big laughs. The show is written and directed by comedy veteran Malcolm Galea who is also no stranger to panto.

Set on a Mediterranean island during colonial times, the show sees Merry Poppins, a nanny that is not your average nanny, being summoned to look after Governor Banks’ bratty children Mikey and Jane. Together with her confidante Bertu, Merry takes them to a fantasy land where they can have fun while helping the desperate Princess Fuzzyfluff and learning about responsibility. However all is not well! Back at home, the Governor and Mrs Banks are constantly being pressured by the power-hungry Lord and Lady Richman whose connection with the mysterious Dark Duke Derek makes them a force to be reckoned with.

With a cast that includes panto veterans like  Katherine Brown, Joseph Zammit, Luke Saydon and Mandy Randon to name but a few, music by Paul Abela, choreography by Alison White, and costumes by Ernest Camilleri, this year’s MADC panto is all set to take its place as one of your fondest Christmas highlights.