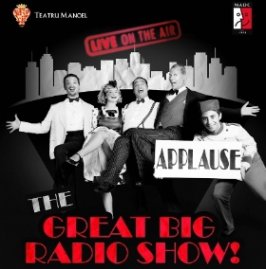 New York, 1933…… ‘The Great Big Radio Show!’ is America’s top rated variety programme, due to go out live at 8pm. But the star has not arrived! What to do?

The producer, Bernie Bernstein, his P.A. Myrtle Gray, and the bandleader and host, Blue Woodward, have to find a singer to take her place. And the main sponsor of the show, Prof.Zannenberg, turns up– AND STAYS!……….. Could things get worse? Oh, yes. And they do……

Blue, together with Jerry Palmer, the production assistant, have a bright idea and head off to the studio cafeteria, in the hopes of finding a singer from another show up there. Polly Appletree, America’s Singing Sweetheart, tries to help out…….

Enter Freckles Murray, new in town. A jobless, singing, violinist. What else would you expect? This is a musical comedy, after all……She was to have auditioned at The Green Fedora, a rather shady speakeasy, but was so alarmed she snatched up her fiddle and ran. The receptionist suggests she could cover for a missing waitress in the cafeteria……..

…….Where Blue and Jerry hear her trilling away, and persuade her to come and sing LIVE! on radio……That’s how stars were made, back in the day – and perhaps also play her violin?

Bernie has been desperately keeping the show live on air…..he is plagued by ulcers and all this anxiety is not helping. A breakdown looms…

Enter Big Louie Rosenbaum and Two-Gun Shapiro, two very bad eggs. They are in search of Big Louie’s missing gat. Which is in a violin case. And who has their gat? Freckles Murray, who snatched it up by mistake. And what has Big Louie got? A violin. He stands a good chance of losing his credibility as a hoodlum if he pulls out a fiddle instead of a machine gun…….They’ve got to get their gat back……Breathless chases ensue..

Enter Olga Schadenfreude, the mega-star who outshines Marlene Deitrich and Greta Garbo. And she agrees to sing on the show! All is well! But there are yet more surprises in store….

The MADC is happy to present, as the opening production of the new season, THE GREAT BIG RADIO SHOW! This  will be happening at The Manoel Theatre, from October 17th for two weekends.

Winner of the prestigious Vivian Ellis Award, and the winner also of The Quest for a British Musical, it is an enchanting and affectionate pastiche of the great musical comedies of the 1930s. It premiered at The Watermill Theatre and later played at The Bridewell, in London. There will be a revival in London next year. The book and lyrics are by Philip Glassborow, with dance arrangements by David Rhind Tutt, and Geoffrey Thomas.

Music and lyrics by Philip Glassborow

Book by Philip Glassborow, with additional material by Nick McIvor