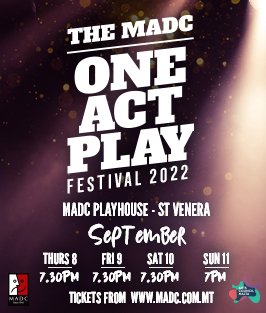 The MADC One Act Play Festival 2022

At the MADC Playhouse, St Venera

Rehearsals are in full swing for the MADC One Act Play Festival.  SIX PLAYS will be participating this year and with such a talented bunch all ready to give you not one but two super entertaining evenings, this iconic festival is surely not to be missed!  Performances run from 8th to 11th September at the MADC Playhouse - Thurs/Fri/Sat performances start at 7:30pm whilst Sunday 11th September’s performance starts at 7pm followed by the awards ceremony.  Here is the full schedule:

Play 3:  Darlings, You Were Wonderful! by Derek Lomas

EARLY BIRD OFFER!!  For a LIMITED TIME ONLY tickets for the premier performances on Thursday 8th and Friday 9th September are at a special rate of Euro12!!

All plays are in English

This production is supported by Arts Council Malta

The amateur productions of “What's for Pudding?”, “Silence” and “Darlings, You Were Wonderful!” are presented by arrangement with Concord Theatricals Ltd. on behalf of Samuel French Ltd. www.concordtheatricals.co.uk

The amateur productions of “Say What???” and “Is This Seat Taken?” are presented by arrangement with Off The Wall Plays www.offthewallplays.com