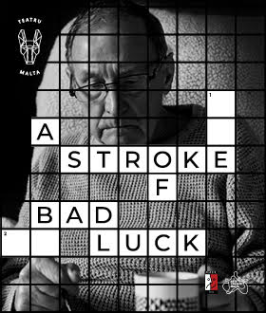 A Stroke Of Bad Luck

DUE TO THE CURRENT COVID-19 SITUATION THIS PERFORMANCE HAS BEEN POSTPONED.  NEW DATES WILL BE ANNOUNCED IN DUE COURSE.  IN THE MEANTIME WE URGE YOU ALL TO STAY SAFE AT HOME.

A famous magician once said that ‘’the only good luck many great men ever had was being born with the ability and determination to overcome bad luck’’;   thus,  Colin Willis is indeed a great man!   After a sudden injury last year, Colin is back and ready to take to the MADC Clubrooms stage this April.   Who is Colin Willis?  Well,  he was the Australian High Commissioner to Malta, fell in love during his posting, left his job and stayed on to continue his life's  passion,  theatre,  and went on to become a mainstay in local theatre productions.

A Stroke of Bad Luck is a biographical piece based on the life of Colin, who relocated to Malta several years ago and recently suffered a stroke. This is a personal and intimate portrait of a man and his partner, seasoned actress and director Nanette Brimmer,  as they come to grips with their new normal.  The production also marks,  established theatre director and former Associate Director of the National Theatre of Scotland, Simon Sharkey’s debut in Malta as co-writer, along with Nanette Brimmer, and director of the show.

In collaboration with MADC and the British Council